The saber used in fencing competition has a maximum weight of 500 grams (but is usually less) and is at most 1,050 millimeters long, with a blade not longer than 880 mm. The guard must be small enough to pass through a hole 150 mm by 140 mm, keeping the flat of the blade parallel to the 150 mm sides of the hole.

While retaining its general dimensions, the fencing sabre has lost weight as fencing has increasingly emphasized speed. In the fencing schools of early 20th century Vienna, a sabre had to weigh at least 500 grams. 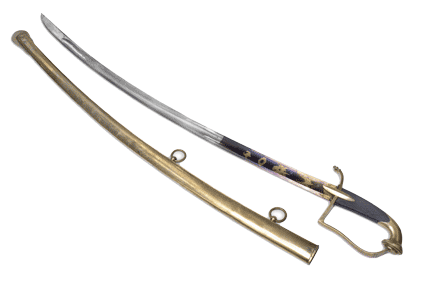 The last of the working swords were the cavalry sabre and the naval sabre.

The ceremonial swords worn by diplomats and military officers are sabres. Because they have been used to differentiate ranks, ceremonial sabres have been made in a bewildering array of sizes.